How much does our selector get out of this?

Keeping up with its generosity towards sporting achievements, Maharashtra State Government has announced cash rewards for Indian tennis-duo of Leander Paes and Mahesh Bhupathi who recently regained their world no. 1 ranking by winning the Miami Open doubles-title. A sports ministry spokesperson announced a “cash back guarantee of 5% on all inter-state toll tax collected from Paes-Bhupathi, on the condition that they are traveling together at the time of toll-tax collection. They of course would need to produce the receipt later to use the benefit.”

Not the one to not take a hint, Indian Tennis Federation also announced special reward of “Kaya Skin Clinic” discount coupons for the winning duo. “It’s a handsome discount of 74% on full-body skin treatment”, said the official release.

Not only this, Leander Paes and Mahesh Bhupathi were greeted by thousands of chanting fans in Mumbai, all the way from the airport to their respective homes in suburbs. Most of them were obviously drunk, lying on the roadsides, and forwarding any SMS that came their way. “Of course they were chanting our names – Mahesh and Leander is Mahender”, said Mahesh Bhupathi.   “As I entered my home, firecrackers were still going up”, said an ecstatic Leander. “Surely it can’t be because of the World Cup win which is already 3-days stale now”, he added hesitantly. 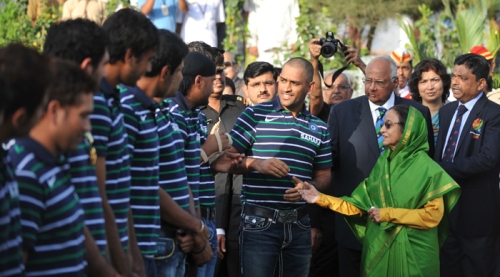 Give me your account numbers, boys! (Photo Courtesy: NDTV.com and AFP)

Meanwhile UPA has announced a cash-reward of Rs. 1-Crore for Rahul Gandhi too, for “being present at the venue and inspiring a win – a rare occasion”.